GRP nominated for the “Großer Preis des Mittelstandes” in 2019

The motto of the competition is more important than ever: “Healthy medium-sized businesses – strong economy – more jobs”. The motto of the 25th anniversary year 2019 is “Sustainable management”. 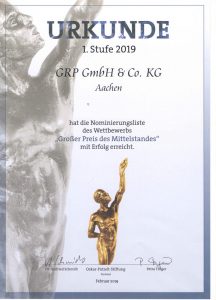 GRP GmbH & Co KG was nominated for the “Großer Preis des Mittelstandes 2019”. Only every thousandth company in Germany reaches the nomination list. GRP is one of them – a great success for the medium-sized company based in Aachen.  The nomination for this competition, for which one cannot apply oneself, is regarded as an admission ticket to the “Network of the Best”. Because as only restaurant price of Germany the large price of the middle class does not consider alone numbers, innovations or jobs, but the enterprise as a whole and in its complex role in the society.
Translated with www.DeepL.com/Translator

The nomination – in the 25th year of the award – is a great praise for GRP GmbH & Co KG. GRP GmbH & Co KG now has until April 2019 to compile and submit meaningful documents. An independent jury will then select the winners and finalists. The award ceremonies will take place in September, followed by the Federal Gala in October.