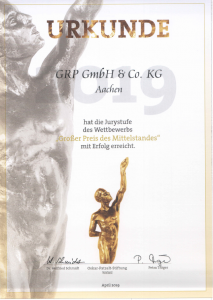 In March, GRP GmbH & Co. KG was nominated for the independent “Großer Preis des Mittelstandes” of the Oskar Prenzel Foundation and now one thing is certain: we have made it to the next round!

Just 14% of the 5399 applicants made it into the 2nd stage of the competition – and we are there!

The competition was announced for the 25th time in 2019 and this year’s motto is: Sustainable management. The competition is organised entirely on an honorary basis and financed exclusively by private funds. The objectives include the promotion of respect and esteem for corporate responsibility, the presentation and popularisation of the successes of committed entrepreneurial personalities and the promotion of networking among SMEs! The competition evaluates the company as a whole and its role within society.

Having successfully overcome the 2nd hurdle, we are now eagerly awaiting the award ceremony on 28 September 2019, when the decisions of the jury will be announced.

We can already agree with the Oskar Prenzel Foundation on one point: No matter what the jury’s decision will be, one winner has already been determined: the entrepreneurial middle class as a whole!